As a mark of respect to our military on Remembrance Day 2014, we asked the team at Angel Solutions to look into the history of local military man, Noel Chavasse. Here’s what we uncovered: 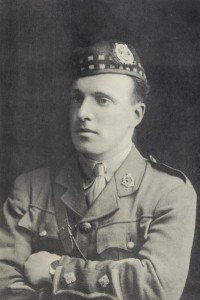 One of four brothers, who all served with distinction in the First World War, Captain Noel Chavasse VC was born in Oxford and moved with his family to Liverpool when his father was appointed Bishop in 1900. In fact, he lived just around the corner from our Angel offices in a house on Abercromby square, where a statue now stands as a fitting tribute to his military service.

Noel grew up to become a military surgeon, and famously refused to take cover under fire, instead choosing to tend to the wounded openly on the battlefield. His “conspicuous bravery and devotion to duty” led to him being awarded the Victoria cross in 1916 and Bar to the Victoria Cross in 1917 (the equivalent of two Victoria Crosses). He was the only serviceman in the Great War to be decorated in this way. Sadly, Captain Chavasse died from the wounds he sustained while rescuing injured personnel in the second of these battles.

He was notable in that he was not a soldier but a medic and a non-combatant and his awards for bravery were for his relentless efforts to seek out and save the wounded on the field of battle, often under heavy fire from the enemy.

Before even going to the front line, Noel Chavasse famously wrote “my blood is not heroic”, which goes to show, you don’t know what you’re capable of until you’ve achieved it.

His twin brother, Chaplain to the Forces 2nd Class Christopher Chavasse, was awarded the military cross in 1917 “for conspicuous gallantry and devotion to duty… Although continually under fire, he volunteered on every possible occasion to search for and bring in the wounded.” — Two brothers, and two remarkably similar stories, demonstrating the deep-rooted ethos of the Chavasse family: to sacrifice themselves to save others.

We are inspired and we are thankful.

There are hundreds of individuals we could have highlighted this week, and many more stories of military service that aren’t even listed in the record books. So, as well as honouring the Chavasse family, we dedicate this post to the thousands of service men and women who have served and who continue to serve in our armed forces. We honour your sacrifice.